The tangled History that brought Vanilla to Europe 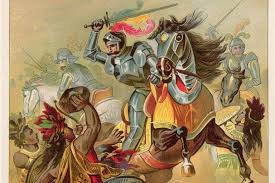 Vanilla is one of the most popular and well known flavours of Ice cream and it also acts as the basis for many other sweet treats. It is in Custard for tarts and also in some coffees. It is particularly used in French and Iberian cuisine but it is not native to these countries. How it comes to Europe is an interesting tale or violence and subjugation that begins deep in the Jungles of Central America over the Atlantic Ocean. One of the best examples of Organic Vanilla Extract  you can buy is from Foodie Flavours, a brilliant flavoursome addition to your cooking. The peaceful Totonac people in what is now Mexico were happily growing and using the Vanilla pod to make their meals pleasant and tasty. Little did they know that a developing tribe known as the Aztecs were on the rise and seeking to conquer the country. The Aztecs defeated the Totonac people easily and set about stealing their ideas and enslaving them. They discovered the secret of vanilla and duly began to use it themselves.

So as you sip your French Roast Latte with a shot of Vanilla syrup think on the fact it’s got quite a dark history behind it.